A cookie is information stored on your computer by a website you visit. Cookies often store your settings for a website, such as your preferred language or location. This allows the site to present you with information customized to fit your needs. As per the GDPR law, companies need to get your explicit approval to collect your data. Some of these cookies are ‘strictly necessary’ to provide the basic functions of the website and can not be turned off, while others if present, have the option of being turned off. Learn more about our Privacy and Cookie policies. These can be managed also from our cookie policy page.

IE10 and below are not supported.

CLOSED: This discussion has concluded.

A better way to cross the canal

In the summer of 2021, I started biking to work from the west end of Ottawa to the Byward market. I would take the Ottawa River pathway which offers breathtaking views of the city.

On my way to the market, I had to make a stop at the rideau canal in order to cross and continue my commute. In order to cross the canal at lock station 1-8, the only option available is by walking on top of the lock itself (see picture). 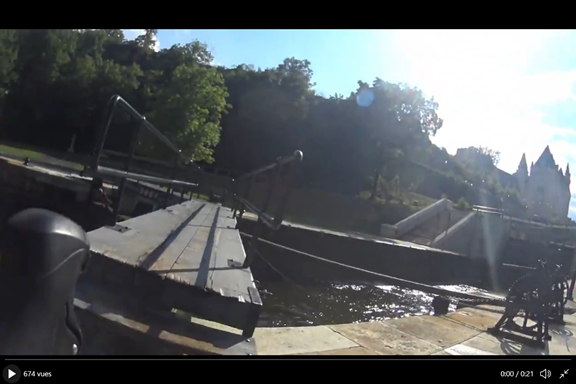 I started thinking about the numerous challenges that this represents. To begin, the steps at each side of the locks prevents it from being used by anyone with a wheelchair. The steps themselves do not have handrails and the low metal bar on each side of the lock makes it rather vertigo induced experiences for the people that cross over.

I also started thinking about the many people who may not be physically able to lift the bicycle across, particularly as E-Bikes are rising in popularity as well as people who are carrying bags, children and groceries who are likely frustrated because the passage is so narrow.

The more I would take this route over the summer, the more I would see lines of people, often tourists, that are eager to discover the rideau canal but are frustrated as the limited width only allows for one person to cross at a time. While this was in a time of pandemic, I can only imagine how many more people there would be in a regular summer.

It got me thinking about how much more everyone would enjoy the rideau canal if there was an accessible, safe and enjoyable way to make it across.

I believe that offering a safe passage would encourage Ottawa residents to use active forms of transportation instead of their cars in a way to reduce carbon emission. The increase in foot and cycling traffic would also be a huge plus to the shops and restaurants in the Byward market.

While I do realize that there are logistical issues and the heritage status of the rideau Canal that must be taken under consideration, I believe that a pedestrian bridge or a modification of the lock structure would be a great solution. To draw inspiration, there are many cities around the world with Canal's that use various footbridges to allow for passage for example Montreal with the Lachine Canal.

As the portion of people using active transportation are only set to increase, I believe that this is an example of a critical item that would help the Rideau Canal become a sustainable location for the next 10 years.

When the Rideau Canal opened, it offered an incredibly easy passage for boats, let's make sure it offers easy an passage for people as well.

2020 the Year of Covid gave me a new appreciation of the pleasures offered at of the Rideau Canal...
1 comment
Recently active Posted first
ceesmidgins over 1 year ago
The situation at the Hartwell Locks is very similar. I work at Carleton University and cycle to work on a regular basis. Having to lift my bike up and down at the end of a ride is a big challenge and would be a disincentive to many people who may otherwise ride. It also means I won't be able to take this route with my cargo bike. This is a major active transportation crossing in the city as it connects several of the safest routes along the canal and across East and West corridors.
I have witnessed many disabled people, seniors, and others who struggle at this crossing. It is so narrow and the steps down don't have hand support and the entire thing can be quite slippery in poor weather conditions.
Agree 0 Disagree 0 Alert moderator